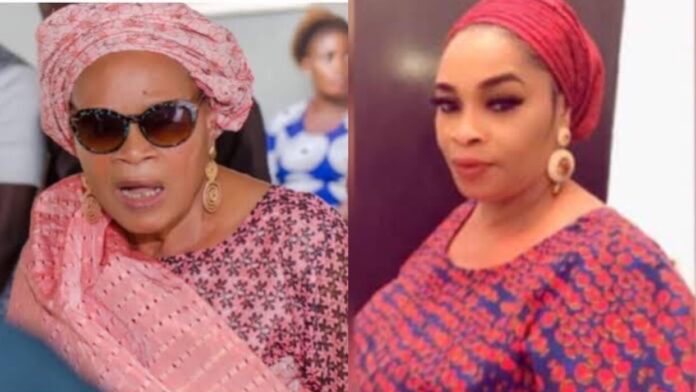 The biography of Remi Surutu is a Nigerian veteran actress, entertainer and businesswoman born on the 14th of May, 1969 in Ondo State.

Remi Surutu is the stage name of Remilekun Oshodi, a Nigerian actress and businesswoman who was born on May 19, 1969. She is known professionally as Remi Surutu.

She first gained widespread attention for her captivating performance in the film “Surutu.” She has collaborated with some of the most well-known Yoruba actors, such as Rotimi Salami and Mustapha Sholagbade.

Remi Surutu was born on May 19, 1969, and his family is from Ondo State in Nigeria. He is a native of that state.

Her educational background includes time spent at the Corona Nursery and Primary School on Victoria Island as well as the Federal School of Arts and Science in Lagos.

Before she started acting, Remi began her career as a model, working for modelling agencies including Lintas, OBM, and the Concept unit. After that, she moved on to acting, with rehearsals and shoots taking place at NTA.

Before she became famous, she worked in the morgue at LASUTH as well as at a funeral parlour called Ebony Casket. She established herself in the acting world by landing a part in the television series Village Headmaster. about blank

Before she finally made her home in the Yoruba-speaking sector of the Nigerian film business, she was part of a number of television programs during her career in the entertainment industry.

The character that Remi played in the film “Surutu” is largely responsible for her rise to fame. Since she first gained widespread recognition, she has acted in a variety of films, including Asiri Tete, Ipo, Ewa Ademi, and many others.

She has appeared in productions alongside well-known actors like Rotimi salami, Adunni Ade, Funmi Awelewa, Wunmi Toriola, and Mustapha Sholagbade.

She was involved in a messy fight with her colleague, Fathia Balogun, at a party where she made it known that she had to confront her fellow actress to put her in place.

On May 19, 2019, Remi wed the man who had become her new love interest, Prince Olasunkanmi Oyeyemi. The gospel musician Yinka Ayefele served as the event’s special guest performer.

Top celebrities from the Nigerian film industry, including Folorunsho Adeola, Baba Tee, and Bukola Adeeyo, were also in attendance In July of 2017, she was bereft at the loss of her first daughter.

Remi Surutu is an active user of Instagram where she connects and interacts with his teeming followers. She has 130K followers as of June 2022.

Celebrities Who Canceled Their Weddings After Engagement